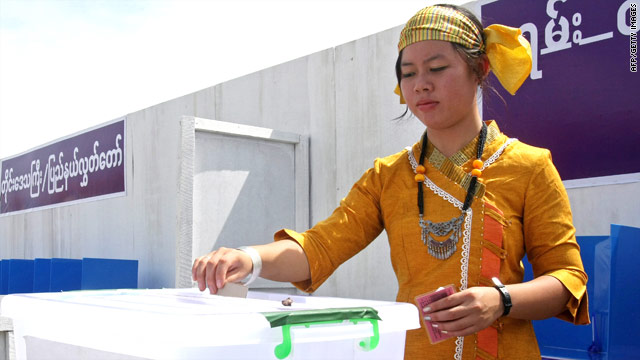 Today, the people of Myanmar for the first time in twenty years will elect a new government.  Actually, they will simply participate in a rigged election process that will legitimize the repressive military regime that has controlled the country by force for the past half-century.  Under pressure from the West and perhaps craving a bizarro sense of legitimacy, the military is holding elections for the first time in twenty years, yet it has effectively guaranteed that the country will remain under its control.  No matter what, the military will maintain 25% of the seats in parliament and will control three key cabinet posts (defense, interior, and border).  The two main political parties are offshoots of the military.  And the ethnic regions in the east and north will not even be given the chance to vote, as it is “too dangerous” to man polling stations in these regions.   No foreign journalists or elections monitors will be allowed in the country and the flow of information has been stifled as the Internet is all but crippled.   Not exactly ideal conditions for creating a fair and truly participatory democracy.

This is the reality of these types of elections.  But this kind of outrageous and brazen election-rigging is not uncommon in countries like Myanmar.  Unfortunately, holding elections in countries that are not ready to have them is a core component of our foreign policy.  According to the theory, when leaders are voted into office in free and consistently-held elections, they have greater accountability in terms of supporting sensible economic policies that benefit the country.  This theory is true…in theory, but not always in practice The belief that elections are a necessary tool for creating economic growth is too simplistic, and lacks an understanding of the institutions that make democracies successful.  In order for elections to actually translate into positive policy reforms and economic growth, a country requires a system of checks and balances that prevents the incumbent party from using illegal means to secure its place in government.  What is happening in Burma right now is a perfect example of how a country without these necessary checks and balances is basically f-ed.

Paul Collier and Lisa Chauvet, two development economists who focus on fragile states, researched the impact of elections on economic reforms.  In countries that had free and fair elections, the result is good policy.  In countries that are not ready, the opposite is true:

Doubts over the efficacy of elections in developing countries are particularly centred on the scope for subverting them. Incumbents can resort to several illicit means of retaining power, in which case they are released from the discipline of adopting good policies in order to win votes. We explore whether the conduct of elections affects their structural efficacy for policy improvement. We use information provided by the Database of Political Institutions relating to electoral competitiveness (based on the proportion of seats won by the opposition) as a proxy for the quality of elections. We find that the quality of elections matters for the efficacy of elections. It seems that the favourable effects of elections depend upon them being of reasonable quality. Low-quality elections have no significant effect and indeed may actually worsen policy. Our results suggest that if elections are of low quality, the less frequently they are held the better. These results are consistent with theory. If governments are able to win elections by illicit tactics, they are not disciplined by them and won’t improve policy or governance.

An election that is not “free and fair” is a broken technology; it cannot be expected to hold governments accountable to citizens. Hence, the overall conclusion from our analysis is that the frequency and conduct of elections matter. Our results suggest that elections are a key instrument in achieving accountability. But elections fail to achieve accountability if they are infrequent or uncompetitive.

In other words, uncompetitive elections effectively release the incumbent party from the responsibility of good governance.  And, in the case of the military junta in Burma, an election simply creates a veneer of legitimacy to a completely illegitimate government.  But before jumping to any unfair conclusions, it is only fair to assess just how democratic the elections will be.  Here is a taste of what campaign season in the capital city of Yangon looks like:

For the residents of 87th Street, a small but densely populated dirt lane in Yangon, campaigning for the elections began with a surprise offer from the municipal authorities: The government would pave their street in exchange for 500 votes for the military-backed Union Solidarity and Development Party.

After local residents fed up with mud and dust agreed to fill out the ballots, construction crews arrived and began pouring concrete. But work on the road abruptly stopped when officials realized they had collected only about 100 votes for the party, according to one of the residents.

As the elections approach, a narrow ribbon of concrete covers one side of 87th Street. Residents say they hope that construction crews will return someday to pave the other half.

Let this be a lesson to all the neoconservative nation-builders out there: an election alone does not a democracy make.  The Burmese people are entering election day with a guarded optimism.  Unfortunately, things might only get worse.

One thought on “Do Elections Improve Economic Policy? Democracy in Burma”