The other day I had the chance to hear Michael Schlein speak about microfinance.  Schlein is the current CEO of Accion, one of the largest microfinance organizations in the world, serving over 150 million clients in during its history.  It currently operates 62 microfinance institutions in 31 countries covering 4.9 million outstanding loans.  He said a few things that I found out interesting.

Having only worked as CEO for one year, Schlein spent the better part of 2010 visiting Accion’s international operations around the world.  He spoke at length about his experience in Haiti.  After the devastating earthquake this year, the country has been plagued by problems.  Every Accion employee lost at least one close friend or family member in the disaster, including one who lost seven.  Port-au-Prince has effectively been destroyed, with piles of rubble where buildings once stood.  The impacts are staggering:

In a country of 10 million people, a third of the population was affected.  10% of the population had their homes destroyed, and 5% were either killed or injured.  The earthquake occurred in January.  As of July 2010, 98% of the rubble still remains.  Considering the state of the 9th Ward in New Orleans 8 years after Hurricane Katrina, the fact that much progress hasn’t been made in Haiti is not surprising.  The earthquake has affected every facet of the country.  The infrastructure and roads are damaged, commerce and economic activity in general has slowed, health services are deficient, and law and order – never a strong suit in Haiti to begin with – has fallen on hard times.  Businesses have shut down after their storefronts collapsed and those still standing have fewer people who can afford to pay for goods and services.   The West, led by the United States, pledged several billion dollars in aid to provide assistance to the country.  Hundreds of aid organizations have flocked to the capital city to set up operations, which has had the counterproductive effect of driving up already-high real estate prices.  Smaller Haitian businesses and entrepreneurs cannot compete with these well-funded aid organizations for resources and are effectively crowded out.

From the outside, the situation appears dire.  But what do the people themselves think?  Mr. Schlein said that, before he arrived, he wondered how Haitians would view their situation and prospects for recovery.  Would they be hopeful or hopeless?  As Mr. Schlein discovered, the country is not yet to the point where they can even make this judgment. 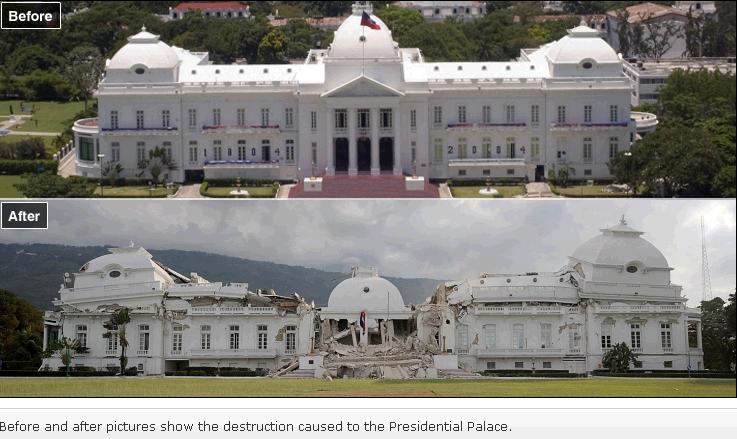 The Presidential Palace in Port-au-Prince is a stately, distinguished building that could be mistaken for a government building in Washington D.C.  Perhaps the most iconic photograph following the earthquake is of this white columned building in pieces on the ground.  The building that housed the highest levels of government was destroyed in an instant.  Adjacent to the Presidential Palace, the National Assembly building once housed the congress.  It, too, has been destroyed.  And in the immediate area around the palace, the buildings that were home to various government ministries have all been reduced to rubble.  Many key government officials were killed in the earthquake, and entire systems were lost or destroyed:

A furious recovery effort is under way at the palace and other key government buildings around Port-au-Prince that are the country’s administrative lifeblood. At the Finance Ministry, computers were hauled out on Thursday that contained all the tax information for the country, which is the poorest in the hemisphere. After an inspection tour at the palace on Friday, workers will begin scavenging through the wreckage soon to get at national security documents and other confidential paperwork that officials say are filed away there.

For a minute, set aside the fact that hundreds of thousands died, that countless buildings and residences were flattened, and that chaos engulfed an already chaotic country following the earthquake.  How can a country begin to deal with the kind of problems faced by Haiti without a strong government?  Even before the earthquake, the government in Haiti could be considered weak, at best.  Out of 179 countries, Haiti ranks 168th on the Corruption Perceptions Index.  But, at the very least, Haiti had a functioning government.  Now, with records destroyed and key administration officials dead, how can the government even begin to tackle the challenge of reconstruction?  This was Schlein’s point.  If the government were functioning at even a basic level, it would be possible to assess its ability to improve the situation in Haiti.  Given the epidemic corruption in the government before the earthquake, most would probably have characterized the forecast as more hopeless than hopeful.  But not even that government exists anymore, and the country cannot even begin to rebuild until the government itself is rebuilt.

This was something I had not considered.  But the more I think about it, the more sense it makes.  And it shows that the country has a long way to go.