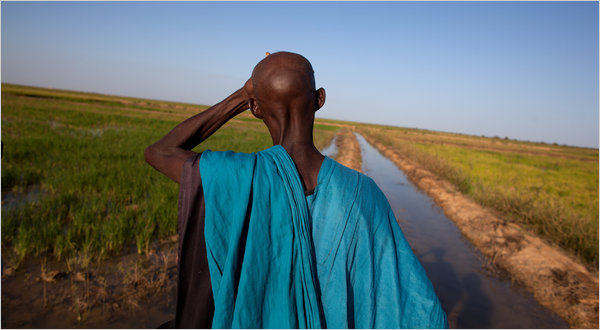 The ADVANCE project, which I am currently working on, seeks to “improve Ghana’s agricultural sector by increasing competitiveness in domestic, regional and international markets.”  The way to do this is to give smallholder farmers (defined as those with 1-2 hectares of land, or renters) better access to fertilizer and chemicals, better access financing and seed varieties that the market demands, and more efficient machinery.  This process is called “upgrading,” and it is the key to import-substitution for the rice, and export competitiveness for soya.  The end goal is food security, and the means is the commercialization of the agriculture sector.

But there is another way of achieving this end, and, unlike a market facilitation approach like that of ADVANCE, it is decidedly not good for the poor:

Across Africa and the developing world, a new global land rush is gobbling up large expanses of arable land. Despite their ageless traditions, stunned villagers are discovering that African governments typically own their land and have been leasing it, often at bargain prices, to private investors and foreign governments for decades to come.

Organizations like the United Nations and the World Bank say the practice, if done equitably, could help feed the growing global population by introducing large-scale commercial farming to places without it.

But others condemn the deals as neocolonial land grabs that destroy villages, uproot tens of thousands of farmers and create a volatile mass of landless poor. Making matters worse, they contend, much of the food is bound for wealthier nations.

Ever since the 2008 world food crisis, wealthy nations have seen the dangers in becoming reliant on other countries for food production and, in anticipation of the next one, have begun scrambling to buy land in Africa.  Likewise, hedge funds see the writing on the wall and are participating in the feeding frenzy too.  The concern is that people will be displaced en masse from their lands and left with nothing to show for it.  On the other hand, many of them are technically squatters, with the actual deed for the land belonging to the government or a major landholder.  Then again, one might find it difficult to impress this on a third-generation farmer living on the same piece of land as his grandfather.

Some people are supportive of investors taking the land.  They have the money to develop the land and invest in production.  When you talk to small farmers about their challenges, invariably you hear the same thing: lack of financing.  That isn’t a problem for big investors.  Two days ago I met with a group of rice farmers and did a cost analysis of their business.  The results:

Four months of work for a profit of 56 cedis (about USD $35).  They have other sources of income, but its almost impossible to compete with imported rice from Thailand, Vietnam, the U.S., and Europe.   Here is what governments have to say:

In Mali, about three million acres along the Niger River and its inland delta are controlled by a state-run trust called the Office du Niger. In nearly 80 years, only 200,000 acres of the land have been irrigated, so the government considers new investors a boon.

“Even if you gave the population there the land, they do not have the means to develop it, nor does the state,” said Abou Sow, the executive director of Office du Niger.

But, like everything in this world, the real reason is politics:

“The Libyans want to produce rice for Libyans, not for Malians,” said Mamadou Goita, the director of a nonprofit research organization in Mali. He and other opponents contend that the government is privatizing a scarce national resource without improving the domestic food supply, and that politics, not economics, are driving events because Mali wants to improve ties with Libya and others.

Oh well.  It’s a complicated issue and I’m not sure where I stand.  On the one hand, investors with expertise will develop the land and make it productive.  On the other hand, the people bearing the burden for these investments will be the poor and the poorest of the poor.  The country elites and investor nations will benefit, and, in the long run, the countries of investment may move a step closer to long-term food security.  But, in the meantime, the families working the lands now will have to find a new place to live.

2 thoughts on “The Dark Realities of Agriculture Economic Development”