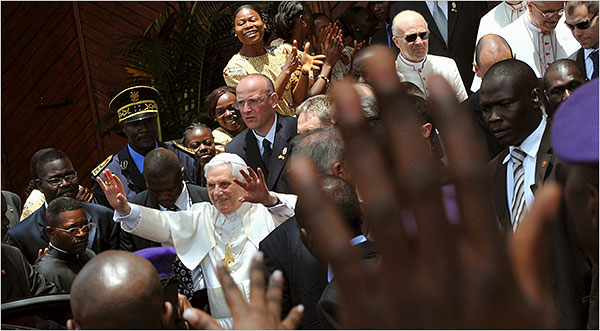 In a possible Joe Biden moment, Pope Benedict allegedly softened his position on condom use in an interview with a German journalist this past summer.   His remarks are being hailed as groundbreaking, even though the context is decidedly limited.  The New York Times:

The pope’s statement on condoms was extremely limited: he did not approve their use or suggest that the Roman Catholic Church was beginning to back away from its prohibition of birth control. In fact, the one example he cited as a possibly appropriate use was by male prostitutes.

Still, the statement was something of a milestone for the church and a significant change for Benedict, who faced intense criticism last year when, en route to AIDS-plagued Africa, he said condom use did not help prevent the spread of AIDS, only abstinence and fidelity did.

There is no doubt that this is a positive development.  But, unfortunately, the Church is not starting from a very progressive base to begin with.  It is a bit like commending the Ugandan government from toning down legislation calling for the execution of gays.  Life in prison is better than death, but it is still unequivocally wrong.  The Vatican’s stance on the use of contraceptives in the past has been irrational and downright dangerous.  First, I will give some background on the role of the Catholic church in developing countries.

The long-term assimilation effects of colonization by the Spanish, coupled with the work of missionaries throughout Africa, South America, and parts of Asia led to the spread of Catholicism in the developing world.  Now, most of the Catholic church’s constituents hail from outside of Europe.  The nations with the most Catholics are Brazil (74%, 145 million people), Mexico (91%, 105 million), and the Philippines (74%, 75 million).  Of the billion or so Catholics in the world, a third come from these three countries.  Another 158 million Catholics live in Africa, and hundreds of millions more in South and Central America.  As a comparison, the United States has 68 million baptized Catholics, putting it in fourth place overall.  In other words, the majority of the world’s Catholics live in someplace other than the West.  And when the Pope speaks, Catholics all over the world are listening.

In the past, the Pope has taken a hard line on condom use, no matter what the circumstances.  On a recent trip to Africa, the pope ignited a controversy by saying that condoms were not the solution to the problem of HIV/AIDS and that distributing them could make the problem worse by encouraging infidelity.  This is, of course, counterproductive and, in my opinion, crazy.  This position ignores reality in favor of an idealized and completely non-existent world.  According to the pope, if you and your spouse do not have sex before marriage and remain faithful to one another, you will never get AIDS.  The problem with this line of thinking is that the kind of world the Pope would like to believe we live in only exists in Thomas Kinkade paintings.   The real world is much less ideal.  The fact is that most people have sex before marriage and fidelity is a fantasy.  As the bible says, “the spirit is willing, but the body is weak.” The strange contradiction of anti-contraceptive dogma is that people pick and choose their sins.  They’ll hire a prostitute and refuse to use a condom.  The Vatican refuses to even acknowledge this reality, and the result is troubling.

The use of contraceptives carries with it two humanitarian benefits.  First, it helps prevent the spread of sexually-transmitted diseases, namely HIV/AIDS.  Catholicism is the fastest-growing religion in Africa and a change in the Vatican’s policy on condoms could save literally millions of lives.  Secondly, family planning is crucial to overcoming poverty.  The Philippines is a good example of where Catholic dogma has had negative consequences.  The Church still has a huge influence on national policy issues.  A recent article from the Wall Street Journal about the family-planning debate in the Philippines explains the dynamic:

The Philippines, a conservative Catholic country that has small Muslim and Protestant minorities and still outlaws divorce, has one of the world’s fastest-growing populations, expanding 1.8% a year, according to the World Bank. That compares with growth of 0.9% in the U.S. The country’s population has ballooned from 27 million in 1960 to 95 million today.

The church has long resisted the introduction of extensive family-planning and education programs, and its views have clout. Condoms and contraceptive pills are hard to find in some areas, and Manila’s city government, among others, has refused to supply them in state-run clinics. Many Filipinos refrain from using contraceptives.Data provided by New York-based reproductive health advocacy group Guttmacher Institute indicates only half of Filipino women have used contraception—a ratio that lags that of some of the country’s neighbors.

While some financial analysts view the Philippines as an up-and-coming economy—Goldman Sachs includes it among its “Next 11” emerging markets—the knock-on effect of providing for large families hurts the ability of many parents to claw their way out of poverty, economists say. That hampers its ability to cut poverty rates like Thailand and Vietnam, which in recent decades have embarked on family-planning campaigns that have included aggressive advertising for contraceptives.

It is very difficult to pass any legislation in the country without the support of the Catholic Church.  Last September, the Church even threatened to excommunicate the current president, Benigno Aquino if he supported a controversial family-planning and reproductive health bill.  The Catholic Church is a hierarchy, and all orders ultimately come from above.   Ultimately, the Church in the Philippines answers to the Vatican, which is why the Pope’s words matter.

One could make the argument (and many do) that the official position of the Catholic Church on matters of sex and contraception have contributed to the perpetuation of poverty and disease on a massive scale throughout the world.   A shift to a position that acknowledges the realities of the world, warts and all, is indeed momentous.  AIDS activists are hailing the Pope’s recent statements as a milestone, and I am sure the public health community is celebrating as well.  The Vatican is moving quickly to clarify the Pope’s words, insisting that he had “not reformed or changed the [Roman Catholic] church’s teaching.” But it may be too late, as progressive Catholics around the world are already pushing to interpret the Pope’s words as an acceptance of condom use in the prevention of disease and unwanted pregnancies.  I hope for the world’s sake that that the horses are long gone by the time the Vatican has a chance to close the barn doors.