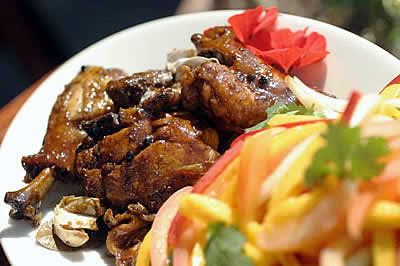 The Philippines has a rich and complex history that is colored by practically as many different cultures as there are islands.  A guy I used to work with used to love telling me about his favorite professor in college, who gave a final exam with only one task: de-colonize colonialism.  In other words, deconstruct the culture, the traditions, the idiosyncracies that make the country what it is.  Remove all of the external influences that have resulted from the different occupations – the Malaysians, the Spanish, the Americans, and the Japanese.  What do you get?  I don’t know, but it would look nothing like what the Philippines is today, which is a rich tapestry of traditions that have been shaped by its history.

Food is an interesting way to look at a culture.  Maybe the most famous dish in the Philippines is simply called Adobo.  One of the first posts I ever wrote on this blog – titled “Cooking Styles of the Philippines” – talked about adobo.  It is like the Aristocrats – a blank slate of a dish tied together by a name and a few basic ingredients more than anything else.  And just as there are thousands of recipes for making chili in Texas, there are as many adobe recipes as there are people who know how to make it.   It is basically a sauce.  The choice of meat, the method of cooking, and anything else is up to you.  So when I saw an article about Filipino adobo in the New York Times magazine, it picqued my interest, only partly because most international news stories about the Philippines highlight the bad, not the good.  Here’s a description from the article:

It is the national dish, many Filipinos say: protein braised in vinegar until pungent and rich, sweet and sour and salty at once, sometimes crisped at the edges in high heat, always served with the remaining sauce. Its excellence derives from the balance of its flavors, in the alchemy of the process. Cooking softens the acidity of the vinegar, which then combines with the flavor of the meat to enhance it.

It is delicious, and makes me nostalgic for the Philippines, a country for which I will always hold a special place in my heart.  There is an adobo contest that happens every year, which, unfortunately, I missed.  What is so interesting about the dish is its versatility.  It can be anything (within reason).  The recipe, the ingredients, and the style can tell you something about the chef:

Filipino cooking is an evolutionary masterpiece, a cuisine that includes Chinese, Spanish, American and indigenous island influences, all rolled into one. But where for one Filipino the most important aspect of the dish is Spanish, for another it is Chinese, or both, or neither. (The journalist and food historian Raymond Sokolov has made the point that the ingredients for adobo were present in the Philippines before Magellan — only the name, which comes from a Spanish word for sauce, came later. “Lexical imperialism,” he called this process.)

Husbands argue with wives about adobo. Friends shoot each other dirty looks about the necessity of including coconut milk or soy sauce in the recipe. There are disputations over the kind of vinegar to use, over the use of sugar, over the inclusion of garlic and how much of it. Some use chicken exclusively in the dish, others pork, some a combination of the two.

Some serve the dish as a stew. There are those who call for broiling the meat at the end, to caramelize it and provide a crisp texture alongside the sauce. Others advocate pan-frying. Some demand deep-frying. Or grilling.

So the next time you go the Philippines, or hang out with Filipinos, or go to a Filipino or trendy Asian fusion restaurant that is avant-garde enough to feature chicken adobo on the menu, ask them how they make it.  Hopefully, it will be a window into their lives.