Problems generally have a cause and an effect.  Trying to solve a problem by focusing on the effects may reduce the impact, but, if the solution fails to address the underlying issues that make it a problem in the first place, the problem will continue to exist.  In Africa, there is no shortage of people trying to address the effects of systemic problems without taking into consideration the root cause.  The best example  is food aid, which fights hunger and reduces malnourishment in the short-term, but ultimately creates dependency among recipients and undermines the domestic agriculture sector, further reducing the local food supply.  By addressing the effects, rather than the cause, traditional food aid ends up exacerbating the problem. 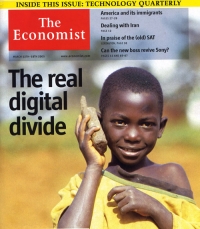 There are fewer examples of companies and organizations targeting the underlying the issues that lead to systemic change, but the ones that have been successful have changed the world.  Mo Ibrahim is a Sudanese-British mobile communications entrepreneur.  He founded the company Celtel, a telecommunications company that has sold 24 million mobile phone subscribers in 14 African countries, and, in the process, catalyzed the mobile revolution in Africa.  Before Ibrahim, no one believed that Africa could be a profitable market for mobile phones and cellular technology.  By proving the the concept, Ibrahim spurred the creation of a telecom sector in Africa with price wars that make the U.S. market look like a state-run monopoly.  In doing so, Ibrahim and Celtel addressed the fundamental problem of communication, making every industry in Africa more competitive on a global scale.  (An interesting sidenote: Ibrahim later formed the Ibrahim Foundation and launched the Prize for Achievement in African Leadership.  $5 million is awarded each year to an exemplary African leader who promotes peace and democracy, but only if there is an acceptable candidate.  According to Ibrahim, “good governance is crucial.”)

Another game-changing technology is mobile money.  In 2007, Nick Hughes, a former Vodafone executive, pushed the company to invest in a technology in Kenya that would allow people to transfer money via mobile phone.  That technology would ultimately become M-PESA, a mobile money transfer service offered by Safaricom, in which Vodafone owns a major stake.  Today, M-PESA has 14 million subscribers representing 81% of Safaricom’s subscriber base and 13% of the company’s revenues.  Safaricom, which has ~70% market share in Kenya, has faced intense competition amidst a price war with other telecoms.  Yet, M-PESA revenues have still increased by 50% every single year since 2008.   In the Philippines, SmartMoney and G-Cash followed the same path. Through mobile money, Hughes and others addressed the fundamental problem of providing financial services to the unbanked.  Now, people can transfer money, pay their bills, and save for the future using only their mobile phones.  Mobile money is still young, and the rippling effects it will have on emerging market economies beyond Kenya and the Philippines remains to be seen.

This past weekend I met the founder of another company that is trying to address another fundamental problem in the developing world: mobility.  Mobius Motors, based in Mombasa, has the modest goal of revolutionizing transportation in Africa.  Here’s how:

Designing and building affordable, fuel-efficient vehicles for developing regions in Africa, Mobius Motors is galvanizing a different, equally important revolution in transportation. Recognizing that the majority of people residing in remote and rural parts of the continent have no access to transit, the company predicts that great strides in economic development, education, sanitation, etc. will come when more people have mobility.

Mobius’ goal is provide enough cheap, off-road-capable vehicles — they look a lot like mini Jeeps — to build a reliable public transportation system. The company believes that this will allow for better access to schools and health clinics, expedite profitable agricultural activities, foster small businesses, and even empower women who spend so much of their time walking to collect water and firewood.

But Mobius’ ambitions have even broader implications for the world’s changing transportation system. Now that more developing countries are industrializing at a breakneck pace, rapid car production is becoming more important than ever. Look no further than China, where automotive demand has spiked. But the world’s climate can’t afford another stretch of dirty industrialization. The cars built to satisfy this voracious demand need to be different: lighter, smarter, vastly more efficient but with comparable utility.

Mobius is trying to reduce the cost of manufacturing to an absolute minimum by stripping away everything it considers unnecessary for a car designed for the African bush.  It is creating its second prototype, which is made from off-the-shelf cost-efficient materials and is frill-less, without like air-conditioning or glass windows.  The cars are modular, meaning they can be adjusted to suit any purpose – transporting crops to market, carrying passengers from the rural areas to the cities, or providing an alternative to the ubiquitous matatu system, which is going to be phased out over the next decade.  Right now, access to urban areas and centers of trade and commerce is a major impediment to people in the rural areas.  This is creating a process of urbanization in Kenya that is seeing a mass migration of rural dwellers into the cities.  If the Mobius car provided a cheap means of transporting goods and people to and from the cities,  people living outside the cities will have more and more options and perhaps slow the rate of urbanization.  Think about your own life, and think of all of the ways that transportation makes your life easier and more convenient.  That is what the Mobius car has the potential to do for Africa.

To my mind, the Mobius car, like mobile money and the African telecom sector, is a bit like the iPhone.  It is a basic platform upon which to build something greater.  The Mobius cars will improve mobility, but it may be in ways that no one envisioned.  Right now, there is a fundamental problem of mobility in parts of Africa.  By addressing this problem, Mobius could very well achieve its goal of revolutionizing transportation in Africa.  The ripple effects in other sectors could be huge.

Last year, Next Billion interviewed Joel Jackson, the founder of Mobius Motors.  Here is what he has to say about the company:

I founded Mobius to change the world. Not by making wealthy economies wealthier but by mobilizing emerging markets, starting in Africa. Effective transport underpins development but sadly is often overlooked. It provides access to education, healthcare, markets and employment. It connects families with loved ones and supports the exchange of products, services and ideas. Imagine your life without transport for just one week. How would your children get to school, how would you get to work, what would you eat and what would you do in a medical emergency? Although developing-world transport presents a huge market opportunity it also suffers from acute market failure with misaligned products and services. Mobius aims to readdress the transport imbalance and mobilize the developing world. This is a vision worth dedicating my career towards, which is why I do what I do.

2 thoughts on “Mobius Motors and Game-Changing Technologies in Africa”