watched the film “Blood Diamond” for the first time the other day.  For those who have not seen it, the movie is graphic, placing the horror of armed conflict in Africa on full display.  The director does not seem to pull any punches in terms of violence, choosing to show child soldiers doing drugs and killing women and other children.  The main storyline, however, tracks the odyssey of Danny Archer, a white mercenary from Rhodesia played by Leonardo DiCaprio, as he and his guide, a Sierra Leonean fisherman named Solomon Vandy (Djimon Hounsou), whose son has been kidnapped by the RUF, and forced to take up arms, as they venture deep into the rebel-controlled bush to search for a diamond worth millions of dollars.  The cynical opportunist Archer ultimately finds redemption with the help and support of an American journalist, Jennifer Connelly.  In the end, Van de Kaap, a thinly-veiled reference to the DeBeers family I’m sure, is exposed for purchasing conflict diamonds, and the world opens its eyes to the terrible war in Sierra Leone.

That is where the movie ends.  One would like to see life imitate art and see a spike in Google searches for the Kimberley Process or “why am I supposed to spend three months’ salary on a diamond?” (The answer, according to the Inductive, has something to do with DeBeers marketing).   At the very least, the film raises awareness about the civil war in Sierra Leone.  For those unaware, here is a brief primer:

The film “Blood Diamond” takes us back to war-ravaged Sierra Leone in the late 1990s when that country’s diamonds were used to finance rebel groups who fought against legitimate governments.  This illicit diamond trade devastated the country, and these traded diamonds consequently were named “blood diamonds.”  This war was infamous for its brutality, especially for the purposeful maiming of children, which led to panic in the population and to their flight from Sierra Leone. In such wars none of us can remain bystanders.

This film, set in Sierra Leone, showed that action can be undertaken to end genocide or war, as in Darfur, and revealed the way to eliminate financing for the conflict. During the war in Sierra Leone the Revolutionary United Front (RUF) grew from a band of 400 to an army of thousands.  In the end, the civil war in Sierra Leone killed more than 50,000 people, displaced over one-third of the country’s 4.5 million people, and drove more than 500,000 to neighboring countries.

Some reviewers complain that the movie exploits the horrors of war in Africa and fails to tease out the nuance of the conflict.  Others say that the film is typical in that it follows two white protagonists, using a love story and a tale of redemption as a plot device, while relegating the third lead, the poor fisherman from Sierra Leone, in more of a supporting role.

The same criticisms are often leveled at Nicholas Kristof, the New York Times columnist who has made it his life’s work to bring injustice in the developing world to the conscious of the mainstream.  In his latest piece for the NYT, titled “An African Adventure, and a Revelation,” he brings two Americans – a medical student from Atlanta and a teacher from a Catholic school in Newark – to Africa to witness the realities of poverty with their own eyes.  They travel to Mali, Burkina Faso, and other countries that almost never grace the pages of New York Times except when they are in reference to drug trafficking, civil war, corruption, or violence.  And because he uses two typical Americans as “bridge characters,” people are able to relate the experience in a more meaningful way and, instead of immediately turning the page, read the article and learn something about countries in West Africa they have probably never thought about in the past.

People criticize Kristof for using so-called “bridge characters,” saying that it is patronizing to his readers to assume that they do not care or cannot relate to the experiences of the Africans on the ground that are doing the real work.  They see this as another example of injustice.  I have written about this several times on this blog, and I both understand and support what Kristof is trying to do. 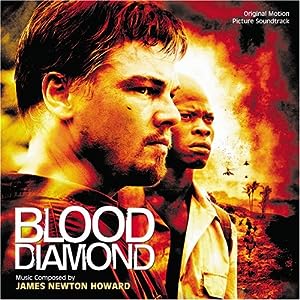 The reality is that he is right – the majority of his readers probably would not read his articles if they were not written in the way he writes.  The people who criticize him are, in general, people who already know, understand, and care about the issues he writes about.  So it makes sense for them to assume he is being patronizing.  But what they don’t understand is that they are not the readers he is targeting.  Instead, his target is the woman from Florida who has never heard of the countries he writes about and, as a result of his stories, becomes incensed at the level of injustice that exists.

I felt the same way when watching this movie.  I have never read much about the conflict in Sierra Leone.  After watching “Blood Diamond,” I wanted to learn more.  I wanted to know how achieving that level of chaos and dehumanization is possible.  I am sure there are many documentaries that have covered the issue in detail.  But because “Blood Diamond” was a blockbuster hit, that was my entry into understanding a complex and crucial time in West Africa.

There is no doubt that the movie achieves its goal in raising awareness.  The question becomes whether awareness  ultimately translates into action.  In a review from New York magazine, film critic and frequent guest on Fresh Air with Teri Gross, praises the acting of Leonardo DiCaprio, saying that his performance makes the heavy subject matter a little bit lighter.  But this dynamic brings with it a contradiction:

[DiCaprio’s] lightness here keeps Blood Diamond from getting weighed down by the horror of its subject.  Whether it should be weighed down—that’s another matter. As I watched the senseless brutality, the shooting of mothers and children as they fled, I was torn up, divided. I thought, Why do I need to see this? Then I thought, This happened in Sierra Leone and is still happening in parts of Africa—I need to see it. Then I thought, If I need to see it, I need to see more than a sneering villain with an eye patch. I need to understand how this man—and the people under him—become the monsters they are. That’s what you don’t get in Blood Diamond, what you don’t get in even the best melodrama: insight. After we stop buying blood diamonds from conflict zones, what then?

Sadly, it is true.  People need to take the next step themselves and become active in making sure that the roots of injustice are addressed.  Unfortunately, I think this will take time.  But, in the meantime, I think more films like “Blood Diamond” are a good thing.

One thought on “Films about Africa: “Blood Diamond””