The following is part three of a four-part post on the joys of solo travel.

In the last two posts, I talked about the need to be prepared for what to expect, and also to be adaptable when deciding what you are going to do while you are out there.  Here, I will give a few tips on making the most of your time and creating an experience that is memorable.

6.  Be adventurous
“To awaken quite alone in a strange town is one of the pleasantest sensations in the world.” -Freya Stark

One of the best things about travelling alone is that decisions are made by a committee of one.  You can look out for number one, and do whatever you want.  If you feel like doing something, just do it.  And a good policy is to use the word “no” sparingly. I had a strict rule when I traveled alone never to turn down an invitation from new friends to go out.

One weekend I flew to Manila for a wedding, and met some friends of friends who lived in the city.  One thing led to another, and I found myself at a place called Ringside, where a new friend was called into the ring to referee a midget oil wrestling match.  Twelve hours later – after chartering a jeepney, eating balut (a duck fetus) on the street, and bartering with a security guard for an extra pair of pants in order to get into a club with a strict dress code – we went to get breakfast.  Sometimes life comes at you fast.  The best thing to do is just roll with it.

A couple months after that crazy night in Manila, I went to Malapascua Island in northern Cebu in the Philippines to go see some manta rays and thresher sharks that come to bathe in a shoal off the island.  A small crew – a couple of Aussies and Luna, a friend from Japan holding the balut to the left of me in the picture above – all met up independently on the island over the course of a few days, coming from all over the Philippines.

To see the sharks, we needed to get up at 4 AM in order to make it out to the shoal by sunrise.  It turned out to be worth the early wake-up time, as I came face-to-face with a four-meter wide manta ray.

Sunrise in the Pacific Ocean – about to see some sharks.

In the afternoon, Luna and I went to explore the island.  Our dive master told us about a cockfight that was happening in the afternoon and told us to come check it out.  I made sure I had enough money in my wallet to place a few bets, and we started wandering around the island looking a group of shouting Filipinos holding roosters.  It took about 20 minutes.

This brings me to my next point – gambling is a fun thing to do while you travel.  I won $200 playing blackjack in Mendoza, Argentina, by following the lead of the guy next to me, who counted cards.  In Thailand, my brother and I bet against the Thais at a muay-thai boxing fight in Chiang Mai.  My brother is a bit older than I am and lived in Bangkok for a few months when he was 23, and made a documentary about American ex-pats living in Thailand.  On this occasion, after winning $20 by betting on an Argentine fighter against a Thai, he shared some wisdom: “At these fights, always bet on the white guy.” Almost certainly, he will be twice the size of his (or her – we saw a lady-boxing match too) opponent.

But in Malapascua, it was different, since it was roosters, rather than people, who were fighting.  I had never bet on fighting cocks before, and I didn’t really speak the local language either.  So I found a guy who spoke broken English to place my bets for me, and put 500 pesos on “blue.”  For those who have not seen a cockfight, it isn’t pretty and it’s over quick.  I won, or so I thought.  I intended to bet on the Filipino handler in the blue shirt – whose bird ended up winning – but the guy placing my bets thought I meant the fighting cock with blue ribbon tied to its spur.  Just one of those cultural things that gets lost in translation.

Sadly, I lost that bet.  But, with a lesson learned, I won the next four consecutive fights.  Turns out, I’m a natural.

On another occasion, I went to the Aboakyer Festival in Winneba, a town two hours southwest of Accra in Ghana where my friend had just rented an apartment.  Calling it an apartment is really charitable, since it was a room in a converted beach resort with a tiny bathroom and kitchen that he paid about $40 a month to rent.   There were 5 of us sleeping in the room.  Me and another person were on the floor, three were were packed into the bed, and my buddy and his girlfriend – the rightful tenants of the apartment – went to sleep on the beach.  On the second night, the electricity went out, and I tripped and fell down the front steps while trying to brush my teeth, and scraped up my leg. 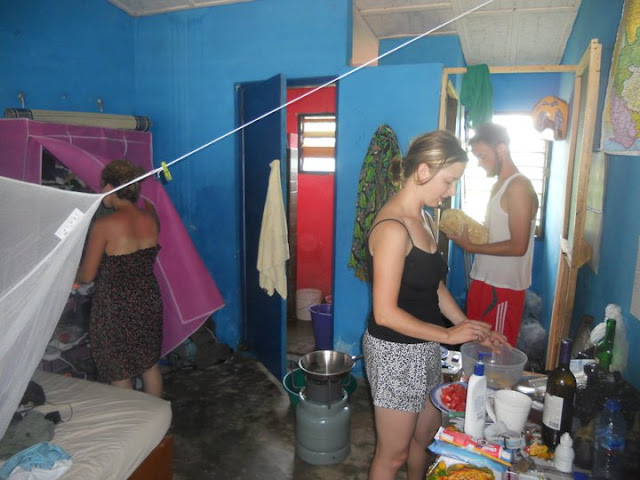 The next morning, I said goodbye to my friends and left to find a tro-tro that would take me to Cape Coast.  I wasn’t really sure where I was going or what I was going to do.  I had the name of a guesthouse on the beach that was supposed to be pretty cool.  When I arrived after two hours, I disembarked in the center of town and sat down at a roadside food stand to eat some rice and collect my thoughts.   I had made the mistake of not cleaning my cut the night before, and it had started to become infected.  Fortunately, I was well-versed in self-care when it comes to travel wounds from my escapades in Asia. So, after getting my bearings, I went to find a pharmacy to buy some hydrogen peroxide and some gauze to clean my cut.

I remember sitting on a plastic chair outside the pharmacy, pouring hydrogen peroxide on my legs, and looking up to see a couple of Ghanaian women laughing at me.  I guess I probably did seem a bit out of place – a white guy in a tank top and board shorts cleaning himself up on the street in Cape Coast.   So I made some self-deprecating remark about my clumsiness, and they laughed even more.

Memories like those are particularly vivid.  They are the moments when you ask yourself, like Rimbaud in Ethiopia, “What the hell am I doing here?”  When you find yourself asking that question a lot, you know are you doing the right thing. 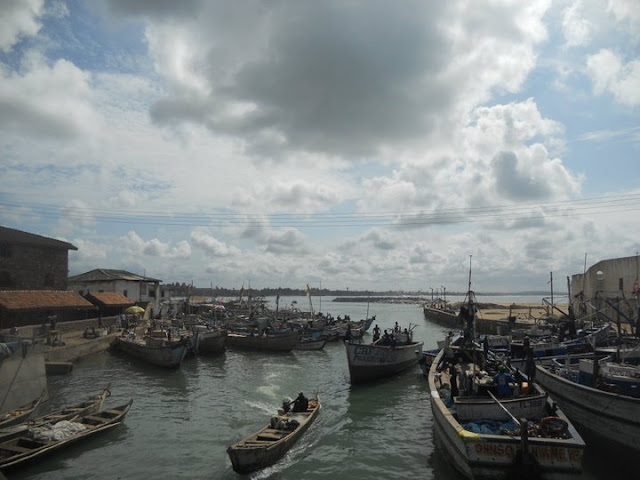 Where I disembarked in Elmina, the next town over from Cape Coast 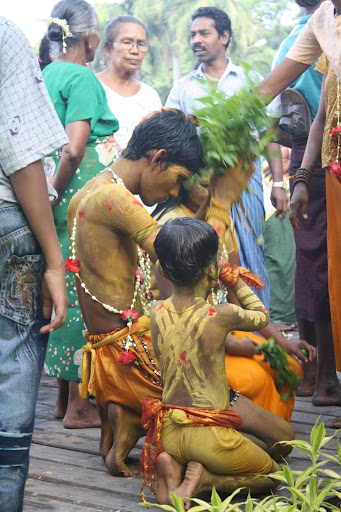 Another of those experiences happened when I was in Burma.  It was my first day there and my friend and I dropped our bags at the guesthouse and went to explore Rangoon.  We first needed to book a bus trip up north, and I got taken for a few dollars (I think) by some swindlers in the main market when we went to go change money – not a great start.  But then we went over to the equivalent of Central Park in Rangoon, where couples were lounging on the benches and families were relaxing by the water.  After a half-hour of zig-zagging along boardwalks through the park, we came upon a small group of people.  Some kids were drumming, and others were dressed in all yellow, and covered with some sort of yellow paint.  Clearly, something was about to happen.

After a half-hour, I felt like moving on, but my friend insisted we stay for a few more minutes.  Suddenly, hundreds of people came marching into the park, followed by drummers and people carrying a statue of a Hindu god.  What followed blew my mind.  The people in yellow began going into violent trances, and had to be restrained by others.  I saw an old woman knocked to the ground by a young woman flailing her arms wildly.  A kid my age pierced his tongue with a miniature trident, while people were chanting loudly.  Eventually, the procession led out of the park and into a nearby field, where a bed of hot coals had been laid out.  A test of the faithful, apparently.

One of the best parts of traveling alone is novelty of new experiences and unpredictable nature of things.  One minute you are sitting quietly in a park; the next, you are watching a Hindu fire-walking ceremony.